The importance of cleat position

The bicycle connects to your body through three contact points – the pelvis, hands and most importantly, the feet. The feet transfer power through the cleat apparatus and our connection to the pedal via the shoe is the single most important piece of the bike fitting puzzle. In-shoe correction of foot mechanics is hugely important and forms part of this surprisingly tricky biomechanical riddle. The other variable is, of course, cleat position. The fore/aft, rotational and lateral play available in modern cleat systems must be positioned as perfectly as possible to avoid instability on the pedal, overuse of the calf musculature and uncomfortable hotspots in the feet. I have provided below a brief overview of how we will position your foot over the pedal, the methods we use to measure cleat position and the implications of mal-positioning. But first, some anatomy;

The foot comprises between 27 and 30 bones depending on your individual anatomy. There are 7 bones in the rear and midfoot with the rest being made up of the distal phalanges (toe bones). 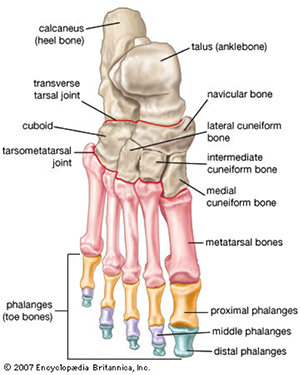 Traditionally, cleat placement has been dictated in large part by bike fitters attempting to place the first metatarsal head (the joint between the largest pink and yellow bones above) over the centre line of the pedal axle, as it was commonly assumed that the first metatarsal head is the “best” place to push on a pedal. So common did this assumption become, that almost all major bike fit systems still extol the virtues of such placement. There is a major problem with this idea however – it simply makes no sense. It is an arbitrary attempt by biomechanists to translate running and walking mechanics into a world where they have no place. The first toe extends and pushes-off during the end phase of the running cycle and transfers significant load through the first metatarsal joint.

Somewhere along the line these mechanical ideas were translated to cycling, and so the famous “ball of foot over pedal spindle” position was born. As a practitioner with a particular interest, and many years’ experience in running biomechanics, this idea has never sat well with me for a number of reasons;

1) The cycling stroke involves no extension of the big toe, nor any major muscle activity in the musculature which flexes the big toe

2) A cycling shoe is completely rigid – that is, the sole cannot flex. Therefore normal foot mechanics, as they are applied to runners and walkers, are completely irrelevant.

3) Under load, most (not all!) riders drop their heels more due, in large part, to an autonomic “disengaging” of the calf musculature. The individual will usually drop their heels more if they have low resting tone in their lower legs – that is, the calf is more easily extended at rest in some, more than others. There are of course exceptions to this rule.

The answer is, as with most things to do with bike fitting, surprisingly complicated. Steve Hogg has written an excellent article here which is a great read and makes good sense. My take on cleat positioning is as follows;

The cleat should be positioned as far back as possible on the shoe to allow the ideal rider-specific compromise between foot stability, calf muscle energy input and sprinting ability.

This statement requires some explanation, so here goes;

As a general rule, the following statements tend to run true for almost every cyclist.

a) The further forward the cleat position, the more the body will recruit the calf muscle to stabilise the foot on the pedal due to the leverage effect of the cleat moving away from the ankle’s pivot point. This muscle activity is not directly used to propel the bike forwards – unless you are sprinting or pushing HARD in a short burst. As the rider fatigues, the heel almost always drops as the calf disengages and is “sacrificed” as one of the very first muscle groups to have its metabolic energy delivery curtailed. The calf’s high-speed, fast twitch muscle fibres are huge energy sappers – they are great at delivering burst energy at high intensity but not so useful for long, slow stability work. Hence, it is worthwhile to minimise calf muscle recruitment unless you are sprinting hard or changing speed regularly (ie crit racing for example).

Conversely, the further rearward the cleat position, the less the calf is utilised for foot stability on the pedal. However, there is no such thing as a free lunch – rearward cleat positioning results in less ability to rapidly accelerate as the calf is recruited to assist the rest of the kinetic chain during such hard efforts.

b) At some point, a more forwards cleat position will unsettle almost every rider. That is, the required effort of the calf musculature to stabilise the foot over the pedal will reach a critical point where the rest of the kinetic chain suffers – leading to instability of the rider on the seat. This is usually due to assymetrical tonicity in the calf musculature – years of walking slightly assymetrically, or having a neurological bias towards one side of the body means that most people have one calf that is tighter, more overactive and more powerful than the other. This calf will usually drop the heel LESS as it is preferentially recruited and lead to a right or left side bias of the pelvis on the saddle with disastrous consequences for your knees.

c) As a rider fatigues during a long ride, most will begin to drop their heels more for the reasons outlined in point (a). This creates an effectively longer leg – meaning of course that the knee has to push further into extension for a strong heel-dropper. The rider’s effective seat height will change. A more rearward cleat position will lessen this effect. As seat height effectively rises, the knee unlocks more violently into extension and normal limb biomechanics can suffer, leading to preferential fatigue and non-optimised biomechanical function.

So what does all this mean? It means nothing is free. A forwards cleat position means a greater ability to change speed rapidly and accelerate (although not affecting outright top speed) at the expense of foot stability. A more rearwards cleat position means more stability over the pedal with less calf muscle recruitment, but a decreased sprint ability. In other words – crit racers and sprinters will likely prefer a more forwards cleat position and long duration road racers will almost always do better over long distance with a more rearward position, assuming that they can catch that breakaway or jump on the wheel that is moving past them at the required time.

A compromise is necessary. We will always take into account the style of riding you are aiming for, as well as your individual tendency to drop your heels under load before deciding on a cleat position. 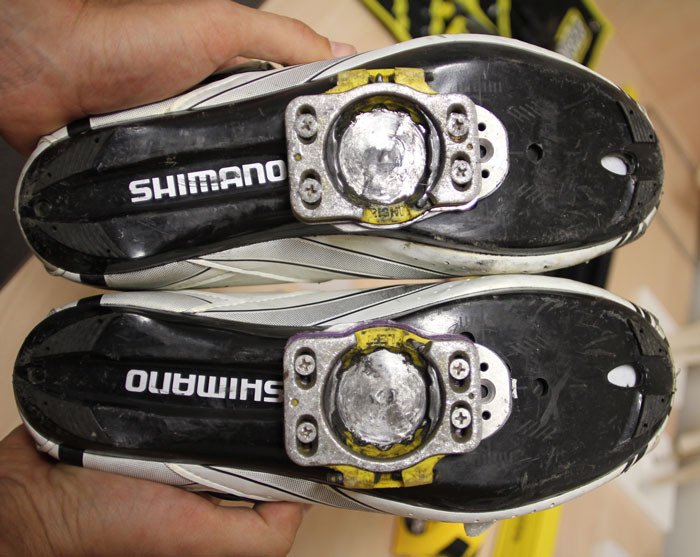 The natural and logical question to ask next is, of course, for endurance riding, why not position the cleat a long way back so as to completely disengage the calf muscle altogether? The answer is – you can. Gotz Heine and his company biomxc^2 have already produced a shoe with the cleat mounted in the very middle of the sole, under the midfoot. If you are able to put aside your natural scepticism and tendency to assume this would not work, the biomechanical implications of such cleat positioning are quite positive for endurance riders. The calf musculature is completely disengaged and thus requires no major bloodflow or metabolic sustenance whilst cycling, leaving more energy to be delivered more easily to the larger power-producing muscles of your leg – the hamstrings, quadriceps and gluteals. Force and torque measurement through the pedalling stroke reveals a lower peak torque, but a higher average torque. Another benefit for some riders is the requirement to lower the seat some 30-40mm with this cleat position – meaning a lower centre of gravity, less frontal rider area and better stability when descending. If you haven’t tried midfoot cleat position and are interested in these benefits, contact us for more information on how to modify your shoes to accept the new eyelet position. Cheap Shimano road shoes like the R087 are currently the simplest to integrate a midfoot position using Speedplay pedals.

Cleat float is a much-talked about area of bike fitting. Often you will hear riders say things such as “I don’t like shimano yellow cleats, my feet move around too much and feel unstable, so I use the red ones with zero float. I feel really solid and “locked in” with these!”

The idea of being “locked in” to a certain plane of movement is fantastic and logical – assuming that this exact angle of rotation is the one that your knee naturally wants to track in. If you are even a tiny bit off-line with the cleat position, the knee (a very simple hinge joint that can function for a LONG time in its correct plane of motion, but a very short time if forced into a different plane!) will be forced to move in a fashion that is dictated by the foot. This situation will, given enough time, result in pain and injury in the knee.

The solution is, of course, to allow the knee to track in its natural plane of motion which should be virtually identical to that of the plane of the crank arm. This means that you can either have some available float in your cleats on either side of neutral to allow the foot (and hence knee) to find its own correct plane of motion, and then very carefully place your zero-float cleats in this precisely measured position, or you can ride as most of us do with some degree of float available on each side of your natural riding position.

If the foot squirms on the pedal and feels “loose” with rotational float happening on each pedal stroke – then you have an issue with the plane of the knee’s movement which is simply manifesting in the foot as the torsion forces are transmitted through the tibial bone into the foot. The solution is to correct whatever is causing the knee to move in an unnatural plane of motion – this can range from improper foot correction, not enough arch support, an improper foot separation distance, a dropping hip and so on, the list is endless. The moral of this story is that if your foot feels unstable and slippery on the cleat – the issue is not the cleat’s ability to rotate – it is whatever is causing the improper movement of your knee.

Float is such a simple thing that it should never be an issue for almost any rider – if your position is good, you can have as much float as you like and your foot should never feet unstable on the pedal.