Bike position is perhaps one of the most fundamentally important factors in maximising your cycling performance, and is one of the quickest and easiest things to get right!

For the purposes of this discussion, we will neglect sprinting and maximal power output efforts which are limited by different aspects of human physiology. The focus of this article is to highlight how optimal bike position can influence endurance cycling performance, reduce fatigue and increase average power output.

Fatigue is generally the major limiting factor in endurance cycling excepting psychological factors and pain. It is therefore in all of our interests as road racers and serious social riders to limit our fatigue levels on the bike to the lowest possible levels given our individual physiological limitations. The major physiological limitations during endurance cycling are as follows;

Oxygen delivery in the aerobic model of performance is limited by blood cell mass (elite cyclists have more blood capacity), red blood cell count, ventricular hypertrophy (heart enlargement) and skeletal muscle vascular constriction due to the sympathetic nervous system ensuring that enough blood flow is reserved for preserving brain function. Additionally, fatigue metabolytes, the by-products of aerobic skeletal muscle work, have a clearance rate which is limited by bloodflow through the muscle belly.

It is also important to note the following two important points in relation to this topic; 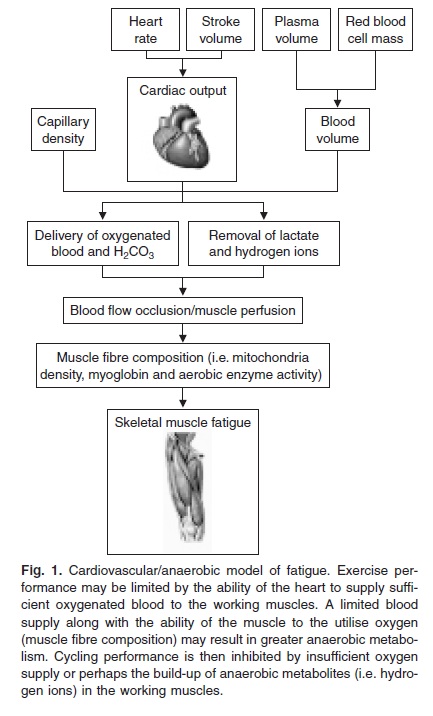 So what does all this mean for cycling position? It means that it is in all of our interests as keen cyclists to position ourselves on our bikes in such a fashion that maximises the ability of the heart to deliver blood to the legs, reduces muscle work outside of the muscle bellies that are driving the bike forwards and, perhaps most importantly, spreads the metabolic fatigue over as much muscle mass as possible. In other words, we want to attempt to spread the load of cycling through our quads, hamstrings, glutes and to a much lesser extent, hip flexors and calves as evenly as possible in order to maximise power output over long periods of time with minimal fatigue. We also want to lessen the work done by our upper bodies to support our weight on the bars of the bike as much as possible.

Neglecting the last sentence of that paragraph for a minute, how does bike pelvis position in relation to the crank centre influence our performance and where should we position ourselves to optimise performance? The answer is very complicated and subject to huge amounts of individual variation across the population, but I will attempt to outline the process as I perform it here. The following statements generally run true for most cyclists, although I have grossly simplified the biomechanics involved and largely neglected the position of the back and upper body for the purposes of simplicity;

1) The higher the seat for a given seat setback and cleat position, the more the quadriceps are recruited to drive the cycling stroke due, in large part, to their greater level of mechanical advantage across the knee joint at higher extension angles in comparison to the hamstrings. Conversely, the lower the seat the more the hamstrings are able to be recruited due to lower knee extension angles increasing their mechanical advantage across the knee. A compromise must be made to spread the fatigue as evenly as possible between the muscle groups.

2) The gluteals play an important role not only in driving the leg downwards into extension, but also stabilising the pelvis on the seat. Higher saddle heights generally increase the work that the gluteals must do in order to maintain stability on the saddle. This is wasted energy. At the same time, lower saddle heights decrease the mechanical advantage of the gluteals as hip flexion increases. A compromise must be made.

3) The calf muscle is the furthest muscle group from the heart and hence suffers the most from vasoconstriction initiated by the sympathetic nervous system to preserve brain function under submaximal endurance efforts. The cross-sectional area, and hence vascular capacity of the blood vessels which feed and drain the calf are much smaller than those which supply the quadriceps and hamstrings above them. The gastrocnemius in particular is also a very heavily biased fast twitch muscle fibre which means it is fantastic at producing massive power efforts for short periods of time (for example sprinting), but is significantly more inefficient when asked to perform aerobic endurance efforts. It is therefore generally in our interests to minimise calf muscle recruitment during cycling. However, the calf is useful for sprinting both in and out of the saddle and for sudden speed changes during cycling as it, via the foot, is effectively another lever arm which can be utilised for short burst efforts. Higher saddle position usually leads to a more toe-pointed cycling style and hence more calf muscle recruitment. Under heavy load, almost every cyclist will disengage the calf musculature and drop their heels more than when under light load. This effectively creates a different leg length and influences the effective saddle height. A compromise must be made.

4) Seat setback alters the relationship of the pelvis to the crank as well. Generally, the further forwards the seat relative to crank, the more the quadriceps are utilised. Conversely a further back seat will engage the hamstring complex more due to increasing the ability of the leg to pull through the bottom of the stroke (think dragging your heels through the bottom of the stroke versus pushing down on a step machine). A compromise must be made to spread the fatigue as evenly between the two muscle groups as possible.

The image to the left shows a markedly simplified version of what actually happens with each pedal stroke. I doubt that it is actually very accurate but does provide an easy way to visualise the various muscle recruitment firing sequences.

First, we determine cleat position and optimise your arch support, heel and cleat wedging. Then we set seat height as accurately as possible by observing the movement of your knee as you cycle under what I call a 20-minute load. A 20-minute load is the load that you can sustain for 20 minutes without blowing up. It is sufficiently difficult that you are working hard, but not sacrificing your technique. Your heart rate should be around 85-90% of maximum during the second half of this type of effort.

During this effort, the knees should move as a metronome or a pendulum. There should be a very even velocity of extension as the knee moves downwards and back up. If there is any tendency of the knee to “flick” into extension at the bottom of the stroke, the seat is too high. Generally we will find where this “flick” begins to happen within 2-3mm of seat height and then lower the seat to just underneath this position. The loss of control of the extension moment of the knee indicates that your hamstring musculature is disengaging and losing control, being overpowered by the quadriceps near terminal extension. For a small portion of the stroke, the hamstrings do virtually nothing. Not so good for spreading metabolic load as discussed earlier – remember we want an even spread of muscle load across the major muscle groups and incorrect seat height (particularly too high) will negate this desirable trait. This method of setting seat height requires a keen eye of the part of the bike fitter but is a skill which can be taught reasonably quickly to a good observer. Torque measurements through the crank arm show us time and time again that power output drops off rapidly if the seat is too high, but only slightly if the seat is too low due to the hamstring’s relative contribution to the pedal stroke. It is usually better to be slightly too low than slightly too high.

The other major issue with too high a seat height, apart from the above, is that as soon as the rider begins to lose control of the bottom of the stroke, they will begin to compensate around the problem. Compensation strategies always favour the dominant side – which means that the rider will begin to move in an assymetric fashion as their central nervous system attempts to deal with the seat height problem. This exacerbates their tendency towards assymetry and too often leads to injuries and pain on the non-dominant leg.

Below is an example of a rider with good seat height – the slow frame rate and poor resolution of the video means a lot of this is invisible on such a medium unfortunately, but you can see that his knee moves as a pendulum – with a smooth tick-tock-tick-tock motion and no loss of control.

Once seat height has been determined accurately, we move on to seat setback. Assuming a comfortable reach to the bars with good on-seat stability and no abnormal tendencies to asymmetry on the bike, seat setback should be determined by a combination of both immediately determinable functional level and then, more accurately, during the second follow-up session after 6 weeks of cycling by determining if any Preferential Fatigue is happening whilst cycling. Steve Hogg’s method which he calls the Balance Test is an excellent starting point – you can read about this HERE. The rider pedals at a 20 minute intensity with hands in the drops, then attempts to swing their arms back next to their hips. If the rider can balance here without tipping or shifting their weight forwards or backwards, then setback is likely to be reasonably close to optimum. The mechanism at work here comes back to our points discussed earlier – we want the upper body nearly completely unloaded during hard efforts to ensure we don’t waste any energy supporting our weight on the arms.
This method is a great starting point for setback. However it is not perfect – due to functional differences between riders, some will have rock solid stability in a variety of fore/aft positions whilst others suffer from instability in nearly all possible positions due to poor functional stability. Think of this as having either “great” core strength or “poor” core strength, although the actual mechanisms at work are massively more complex than this.

The best way to fine-tune seat setback is to send the rider off for 3-4 weeks to habituate to the new position with gentle riding at no more than 75% intensity, before ramping up their duration and intensity for a few rides which will mimic their intended cycling goals. If you’re a crit racer, you should race some crits. If you’re a serious social rider, you should do some serious social rides and so on. When you’re at your limit, and are fatiguing heavily, take note of where the fatigue is spread through your legs. If your quads and/or calves are burning, you likely need more seat setback to engage the hamstring complex. If you suffer from hamstring fatigue the seat needs to come forwards. If the load is spread well across all major muscle bellies, you are bang on target. This assumes the rest of the position is good and no abnormal technique is occurring of course. The rider should be able to get off the bike and walk up stairs without too much difficulty – a common problem for cyclists with “dead” legs is to struggle up the stairs after a ride – generally this means too much quadricep recruitment! You should be tired, but not completely incapacitated by a certain muscle group.

Remember that as the seat setback is adjusted, so too does the seat height. Move the seat 10mm back and you will likely need to drop the saddle around 3mm to account for this effect. After any major setback change, saddle height should be re-assessed and fine-tuned.